What Is ... Yes? Getting Engaged on Jeopardy! It’s not unusual to see lovebirds at Jeopardy! Contestants and studio audience members alike have taken the special event of being at a live taping as a chance to profess their love, both on and off camera.

Today, contestant Michael Pascuzzi got engaged to his girlfriend, Maria Shafer, right in the middle of his interview with Alex! Take a look at how it happened.

Before every show, I bring the three contestants back to the greenroom. They get miked and have their makeup touched up. I go over their chat cards that provide Alex Trebek with prompts for conversation after the first commercial break, and then try to calm their nerves.

I was talking to Michael and asked who his guests were in the audience. He mentioned his girlfriend and I asked how long they had been together. It had been a while, so I jokingly asked when he was going to “put a ring on it.” For other contestants, this question is usually met with a laugh. But Michael responded, “Should I do it now?” I was shocked and made it clear that I was just teasing him. But he said, “When else would I have the opportunity to propose on Jeopardy!?”

And just like that, in a matter of minutes, a proposal was put together. I let producer Maggie Speak know about the plans. She told executive producer Harry Friedman and, of course, Alex. So instead of a typical interview, Alex set up the conversation for him to propose, and she adorably responded with, “What is ‘yes!’?”

We asked Michael afterwards about the experience, and he assured us that Maria was surprised (as was he!), claiming: “Corina, YOU were the one who gave me the idea!” He also added, “See if Alex wants to marry us. We'll come out here!” 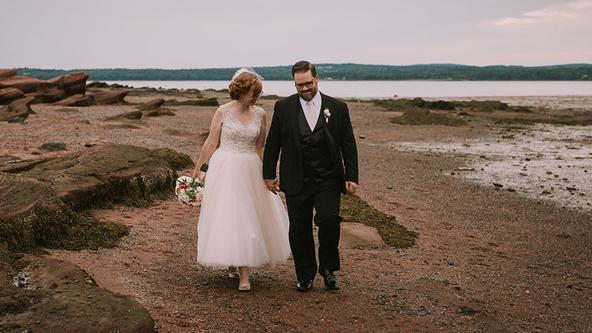 What Is ... a Contestant Love Story?

Couples Who J!: The Fan Edition